The Tech That Will Change Your Life in 2016 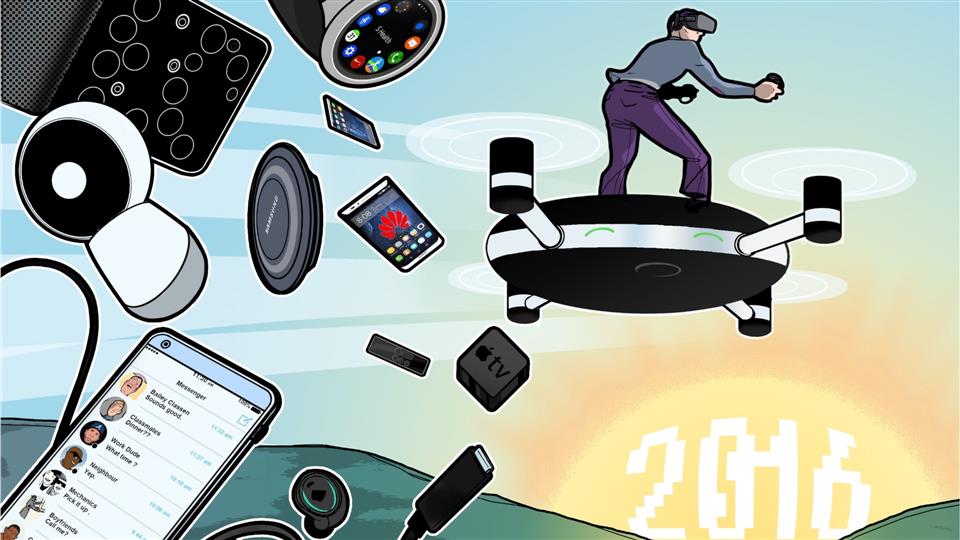 From artificially intelligent messaging apps to drones that follow you like paparazzi, 2016 will turn science-fiction tech into science fact. WSJ's Geoffrey A. Fowler and Joanna Stern gaze into our near future.

Science fiction will become science fact this year when you take virtual-reality vacations and your dishwasher reorders its own soap. Are you ready for a drone that follows you around like paparazzi?

When we gazed ahead at the devices, breakthroughs and ideas most likely to make waves, two themes emerged. One is liberation: We’re increasingly less shackled, be it to a phone charger or a cable subscription. The other is intelligence: As processing power and bandwidth increase, our machines, services and even messaging apps become more capable.

Here are our best picks for what’s coming, and what you can do to be ready for it.

It’s marked on 2016 calendars everywhere: Virtual reality finally gets real. It begins with the scheduled spring arrival of the long-anticipated Oculus Rift headset, followed by HTC’s Vive and Sony’s PlayStation VR. Unlike less expensive smartphone-based headsets like Samsung’s Oculus-powered Gear VR, advanced sensors and imaging in dedicated headsets promise immersive experiences that will make you feel like you’re in a teleporter. (“Augmented reality,” a combined view of virtual and real worlds, being developed by Magic Leap, Microsoft’s HoloLens team and others, is still a ways from home.) Games and other flights of fantasy will be key to the appeal. But thanks to investments in 360-degree video and apps, you’ll also get closer to not-so-far-out realities: front row at a sold-out concert…or a seat at that meeting you’d otherwise miss.

How to get ready: If you have a new Samsung Galaxy phone, get the $100 Gear VR. If you have an iPhone or another Android phone, try out the $20 Google Cardboard. A swivel chair makes it easier to spin through the 360-degree environments without hurting yourself. You may also want some Dramamine.

Your new robot BFF is just a message away. In 2016, messaging stops being just a way to send texts and emojis to friends, but also a way to reach all-knowing bot assistants. Beta-testers in the San Francisco area using Facebook’s Messenger app can already ask “M” to book restaurant reservations, buy a gift for a friend or simply tell you Mom’s birthday. Google is reportedly readying a similar app. Bots aside, messaging software will also evolve to include more features. Just like China’s popular messaging apps, you’ll be able to pay your friends or bills, book appointments, play games, translate messages and more.

How to get ready: A messaging app is only as good as the people using it. Gather your friends and family and try to get them on the same one—best if it works across all devices.

Everybody loves the aerial look of drone photography, but let’s face it—not everybody was born to be a drone pilot. We’ll soon think of drones more like cameras than helicopters, as their technology evolves to compensate for novice mistakes and foolhardy fliers. One maker, Lily, plans to release a waterproof model that launches when flung into the air, then follows you around as you kayak, ski or take a sunset selfie on the beach. Action-camera giant GoPro also plans to deliver a drone, called Karma, though the company has been tight-lipped about how it’ll work.

How to get ready: Unless you’re prepared to commit to flying lessons, don’t buy one of today’s models. Beware, too, of great-sounding drones that appear on crowdfunding sites such as Kickstarter. They may face significant delivery delays—if they deliver at all. Also, get to know your rights and obligations as a drone owner, such as where you can fly and how to register it with the government.

The USB port you have known—and probably hated—is in for a change. In 2015, the smaller, faster USB Type-C port appeared in laptops like Apple’s new MacBook, and phones like Google’s Nexus 6P. This will be the year it also turns up in monitors, hard drives and everything else. The great news: USB Type-C is capable of two-way power, so one port on a laptop could be used to charge the battery and connect an external drive. This should result in fewer cords, plus faster charging. The bad news: All the USB cords you’ve previously amassed will join the rat’s nest in your garage.

How to get ready: Be on the lookout for devices with USB Type-C. Dell and HP just joined Apple with computers that have it. You may also want to buy some USB-to-Type-C adapters—as low as $8 on Amazon—so you can keep older peripherals plugged in.

No, you’re not paranoid: The gadgets really are listening. Voice-operated electronics are poised for a quantum leap in accuracy and intelligence in 2016. Talking offers a more natural way to interact with devices that need complex input but aren’t exactly keyboard-friendly, such as TVs, sound systems and household electronics. Voice arrived in a big way in 2015 when Microsoft’s Cortana virtual assistant came to Windows 10, while Siri and Google Now turned up in cars and TVs. This year, expect voice control on more computers and an even wider range of gadgets, including the CogniToys Dino, a toy that uses IBM’s Watson to help answer questions, and Jibo, a talking family robot.

How to get ready: Find a platform and stick to it. Voice systems work better the more they get to know you, and Amazon, Apple, Google and Microsoft don’t always play well with each other. You’ll also need to learn the still-awkward lingo of some systems, or else you’ll do a lot of yelling.

Chinese smartphones are big globally, but little-known to U.S. shoppers obsessed with Apple and Samsung. In 2016, expect Chinese brands that don’t just undercut on price, but bring features from China’s thriving mobile culture. Huawei, the world’s third-largest smartphone maker, made the $449 Nexus 6P and has declared its intention for a U.S. launch of its flagship Mate 8, which also has a metal body, fingerprint scanner and large battery. Letv, a brand created by known as the “ Steve Jobs of China,” is also poised for a big U.S. splash. Then the ball’s in the court of the enormously valued startup Xiaomi, which has downplayed U.S. launch plans.

How to get ready: If you’re on the fence about buying a new Android phone right now, hold off. At the very least, don’t sign a service contract that ties you to a handset.

Smartphones and point-and-shoots alike are sprouting multiple lenses and sensors to improve image quality, capture depth and “see” in 3-D. Some laptops and tablets already contain multi-sensor cameras—such as Intel’s RealSense—to measure rooms and use facial ID at login. A slim camera called the Light L16, due this summer, goes all out, employing 16 lens-and-sensor modules of varying focal lengths to capture massive 52-megapixel scenes.

How to get ready: Don’t invest in an expensive new DSLR camera just yet. With this new multi-lens technology, you may soon be able to get better shots from a device that’s a fraction of the size and weight.

Television’s metamorphosis has only just begun. In 2016, look for more streaming versions of channels now found only on your cable box, including some big networks and local stations. Just don’t expect cutting cable to save you a lot of money, as your credit card statement floods with assorted subscription charges. Apps will evolve so that it’s easier to find stuff to watch—and provide new interactive experiences for your home’s biggest screen.

How to get ready: Buy a streaming box or smart TV that runs most of the latest apps. Roku remains the one to beat, but the new Apple TV is also a good option given the iPhone maker’s sway with media companies. Decent home broadband and a recent Wi-Fi router will ensure fewer streaming hiccups.

Wireless charging is the tech industry’s campaign promise: often discussed, never quite delivered. This year, we may really stop plugging all our gadgets into the wall. First, an ugly standards war is resolving, with the two leading camps merging into one set of cooperating technologies. (Samsung’s Galaxy S6 actually supports both.) Next, more countertops will provide juice. Starbucks already has tables that charge devices wirelessly, IKEA has started shipping furniture that does the same. GM, Toyota and Audi have it in cars—or soon will. As more compatible devices arrive, many will be capable of faster charging speeds than the sluggish rates currently available.

Without a nearby phone, the smartwatches of 2015 don’t do much more than track steps and tell the time. The smartwatches of 2016, however, will begin to show their independence with built-in wireless, including cellular and GPS radios. It could make a big difference for fitness nuts who want to leave their phone at home but still track routes and stay in touch. LG and Samsung recently launched watches with built-in cellular connectivity, and other popular models should gain enhanced wireless capabilities, too.

How to get ready: Hold off on purchasing a smartwatch for a few months. But once new options are released, pay attention to battery life: Those new radios could severely impact endurance.

Bluetooth headphones are far from new, but this is the year you should buy a pair. Improvements to the wireless technology mean no more muffled sound or dropped connections. We’re expecting several truly wireless earbuds in 2016, including Bragi Dash and Alpha Skybuds—they don’t even need a wire to connect between your ears. There’s even talk of headphone jacks disappearing from smartphones, a casualty of the quest for ever-thinner designs.

How to get ready: You could buy yourself a comfortable pair of Bluetooth headphones, like Bose SoundLink, or the Jaybird X2 for exercising. For the next wave, wait at least until after January’s Consumer Electronics Show.

A Useful Internet of Things

Finally, there’s a reason to connect household items to the Internet, thanks to programs like Amazon’s Dash Replenishment Service. Using sensors built into devices like Brita water pitchers, Brother printers and Whirlpool washers, it automatically orders more supplies when you’re running low. In 2016, expect to hear credible ideas about how everyday objects—from garage doors to air vents—can be connected to help run your house and reduce your worries.

How to get ready: Choose products that support capabilities like Amazon Dash, the first of which are launching early in 2016. Also, look for connected devices that speak a common language like Google’s Works With Nest.